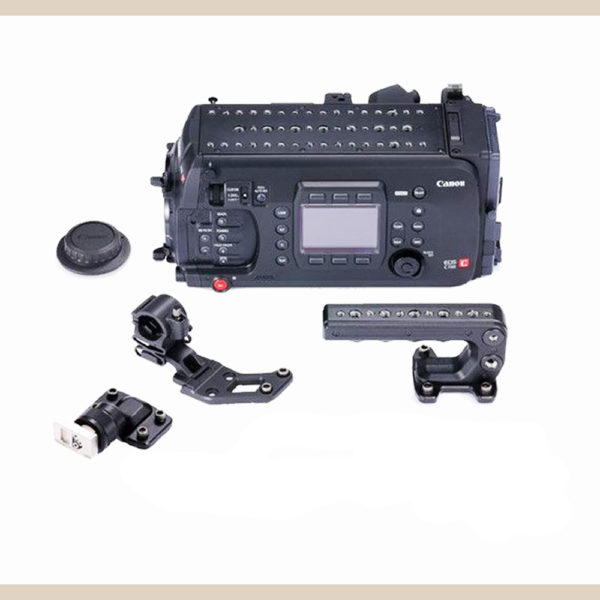 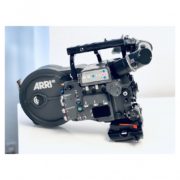 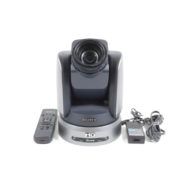 This Used Canon EOS C700 FF Cinema Camera is Full Frame democratized, FF for all. The Used Canon EOS C700 FF Cinema Camera has a new 38.1 x 20.1 mm (43.1 mm Ø) Full Frame, 18.69 megapixel (5952 x 3140) sensor. Pixel size is 6.4 x 6.4 μm. The Used Canon EOS C700 FF Cinema Camera is aspirational Full Frame at an affordable price. It will be especially attractive for independent features, commercials and many other productions. EOS C700 FF segunda mano records Full Frame RAW, ProRes and XF-AVC and comes with either Canon locking EF mount or PL. The camera has 3 sensor modes: Full Frame, Super35 and Super16. Cropping is done in-camera. Rental houses with huge inventories of Super35 lenses will smile. Cinematographers with beloved Super16 lenses will rejoice. Dust off your venerable vintage Canon 8-64mm T2.4 and 11-165 T2.5 S16 zooms. Intercut all three format sizes on the same production. Besides an all-new Full Frame sensor block, the Used Canon EOS C700 FF Cinema Camera looks and acts like the Used C700 (Super35) camera that was introduced at IBC in September 2015. This is the camera that Canon whispered in September 2015. The words in the whisper room were, “The Canon EOS C700 segunda mano camera has been designed from the outset with additional sensors in mind. This may include Full Frame and other formats. Future upgrades to larger sensors and other functions have been factored into the camera design. The idea is to have one camera body that can be updated and expanded—without having to scrap the existing housing, chassis and major assemblies.” That is exactly what Canon has done with the Used Canon EOS C700 FF Cinema Camera In fact, users who already have a Super35 Used Canon EOS C700 FF Cinema Camera can upgrade to the Full Frame version. The sensor block will be swapped at an authorized Canon service facility. The new C700 FF segunda mano is a Full Frame studio and shoulder-resting camera. For RAW 5.9K, 4K or 2K uncompressed files, a Codex CDX-36150 integrated recorder is attached to the rear of the camera. It uses industry-standard Codex Capture Drives in 1 or 2 TB capacities. The Used Canon EOS C700 FF Cinema Camera can also record ProRes and XF-AVC codecs internally to CFast2.0 cards. Larry Thorpe, Canon Senior Fellow, explains, “To accomplish on-board image capture, the Canon Used Canon EOS C700 FF Cinema Camera implements a unique ‘Over-Sampling 4K Processing’ algorithm that effectively mobilizes the significant resolution of the 5.9K sensor to produce outstanding image quality for 4K DCI/UHD and 2K/ UHD recording. “This process begins with a sophisticated deBayer algorithm to form three 18.7 Megapixel RGB frames from the 5.9K Bayer frame. That deBayer processing moves the first order sideband (from original image sensor sampling) to a higher frequency which in turn allows spectral space to implement pre-filtering prior to a subsequent downsampling to 4K / UHD RGB444 frames having enhanced MTF that results in super sharp images. Buy Used Canon EOS C700 FF Cinema Camera.This overall process also reduces aliasing and improves the subjective appearance of noise which in turn supports sharp and clean images at the higher ISO settings.” Full Frame Canon EOS C700 FF segunda mano Apr 2018 • Issue 87 3 Canon Cinema EOS Evolution Canon launched the first EOS C300 camera at Paramount in Hollywood on November 3, 2011. Masaya Maeda was Senior Managing Director at the time and is now President and Chief Operating Officer of Canon Inc. In his introductory presentation, he drew the outline of a pyramid. Consumer, prosumer and DSLR cameras occupied the base. The Used C300 was shown in the middle. The top of the pyramid, representing the top of digital motion picture production, was empty. Asked when that apex would be filled, Mr. Maeda said modestly, “We are still learning. We’d like to begin a dialog with the community here in Hollywood to better understand the expectations of the industry and where we should go.” That was the “beginning of a new relationship” for Canon in Hollywood that has grown substantially ever since. It was a remarkable success story. Used Cinema EOS cameras appeared on sets and locations worldwide. The look, low-light capabilities, mediumformat shape, EF or PL mount, quality and usability was appealing to cinematographers and rental houses. Five months after the Used C300 was shown at NAB 2012, Canon introduced the 4K EOS C500 segunda mano. Another 5 months later, at IBC 2012 in Amsterdam, Canon showed the Used EOS C100 camera. Then, in April 2015 at NAB, Canon presented the Used C300 Mk II with internal 4K recording to CFast 2.0 cards and 15 stops of dynamic range. As each new Cinema EOS model was introduced, whenever I saw Mr. Maeda, I would ask whether this latest camera was the top of the pyramid. He never seemed quite satisfied.

In November 2013, we met at Canon Headquarters in Tokyo. He said, “Well, of course it is our dream one day to actually be able to be the “A” camera, as you call it. But at the moment we are still newcomers when it comes to the cinema world. We believe there are still a lot of things that we need to learn and study first, and then we will be ready to take on that challenge for the high end.” And later, during an interview in September 2015 at Canon Expo in New York’s Jacob Javits Convention Center, Mr. Maeda said, “Unfortunately, at this time, we have not come out with the top, high-end, most advanced camera that you have been hoping for. We are continuing to work on developing such a camera.” He was also prescient in his assessment of Full Frame. Certainly Canon had whetted the appetites of filmmakers with their 5D Mark II that offered Full Frame 24×36 video in 2008. About Full Frame, Mr. Maeda said, ““It is a challenge how far we can go with dynamic range and sensitivity using current APS-C or Super 35 size sensors. A larger sensor size is actually more advantageous because a larger pixel pitch will be more sensitive. Larger pixel sizes are an advantage in low light. And we are not restricted to the Super 35 size by the silicon wafer itself.” Last year, I talked with Hiroo Edakubo, Group Executive of Canon’s Video Products Group and Hiroto Okawara, Senior General Manager of Canon’s R&D and Imaging Products Group. Mr. Edakubo described the beginnings of the Used Canon EOS C700 FF Cinema Camera design: “Around the year 2013, we seriously started to do the research mainly for the Used Canon EOS C700 FF Cinema Camera  based on comments from customers about our Used Canon C100, Used Canon C300, and Used Canon C500 cameras.

Used Canon EOS C700 FF Cinema Camera FF Overview The Used Canon EOS C700 FF Cinema Camera  is modular like the C700 segunda mano. The rugged magnesium body is extremely light weight (approximately 8 lb). The styling is distinctly Canon. Rounded edges and semi-circular sides behind the lens mount follow the Canon design legacy. The Used Canon EOS C700 FF Cinema Camera  will be equally comfortable handheld, shoulder-resting, on a head, Steadicam, gimbal rig or rigged to a car mount. Sensor Modes and Recording Formats The C700 FF segunda mano has 3 Sensor Modes and many Resolution/Aspect Ratio choices. The Sensor Mode setting establishes the maximum recordable image area of the sensor for FF, S35 or S16 formats. First, choose the Sensor Mode in the Menu. Next, pick the aspect ratio in the Resolution/Sampling Settings menu option. Lens Mounts The Canon Cinema Lock EF mount is the same ruggedized version first seen on the  Used C300 Mk II. Flange focal depth is the usual 44 mm. Inside diameter within the lens cavity is 54 mm. A breech lock ring secures the lens in place when you rotate the tabs counter-clockwise. Do not twist the lens itself as you would on a Canon DSLR. The EF mount has Canon’s familiar gold-plated lens data and power pins. The PL mount has a flange depth of 52 mm. The inside diameter is the same as EF: 54 mm. The PL mount is fitted with Cooke /i lens metadata and power pins. Codex Integrated Recorder With a Codex CDX-36150 attached, the Used Canon EOS C700 FF Cinema Camera  will record uncompressed Full Frame 12-bit RAW up to 30 fps, 10-bit RAW up to 60 fps, and 2K ProRes up to 168 fps. The Codex CDX-36150 is the same model made for the C700. It attaches to the rear of the camera and records to a Codex Capture Drive 2.0 (1 TB or 2 TB capacity), the same familiar media used in Alexa and VariCam35. Dynamic Range and EVF The Used Canon EOS C700 FF Cinema Camera has 15 stops of dynamic range. The sharp 1920×1080 OLED Viewfinder (EVF-V70) was introduced on the original C700 segunda mano. It has an HDR simulated picture with a “stretched” dynamic range for increased shadow detail and highlight retention. This is accomplished without the requisite increase in brightness of true HDR. Anamorphic Used Canon EOS C700 FF Cinema Camera supports full height 18mm Super35 format anamorphic lenses. The Used Canon EOS C700 FF Cinema Camera  desqueezes the anamorphic image electronically for 2.39:1 in the viewfinder and on connected monitors. And, as some of the first crews shooting with the camera found out, some 2x anamorphic lenses actually cover the entireUsed Canon EOS C700 FF Cinema Camera  Full Frame 20.1 mm picture height, 32.24 Ø. (Used Cooke Anamorphic /i lenses, for example, cover an image circle of 33.54mm Ø. So, the Used Canon EOS C700 FF Cinema Camera  can capture a 2x squeezed image onto a sensor area of 24.02 x 20.1mm. Of course, you could also fill the entire C700 FF segunda mano 20.1 x 38.1 mm sensor area and shoot with Hawk65 1.3x Anamorphics or Ultra Panavision 1.25x Used Anamorphics lenses. Mounting There are enough 3/8-16 and 1/4-20 threaded holes on the top and bottom to satisfy almost any mounting or rigging situation. The top handle attaches with four screws in many positions and balances extremely well. Focus tape hooks adorn both left and right sides. Clearly, the designers at Canon listened to the requests of camera crews. The shoulder pad consists of two sections that adjust to fit the width of any camera operator’s shoulder. It has industry-standard Hirth tooth rosettes on each side and sockets with 15mm rods in front. The camera comes with a standard rear V-lock battery mount. An Anton Bauer Gold Mount adapter can also be used. Focus Dual Pixel CMOS AF and Focus Guide work with enabled EF lenses. Since Full Frame lenses have a shallower depth of field than their Super35 counterparts (at the same distance and field of view), the Focus Guide is very helpful. Camera operators who work documentary style, or without a Focus Puller, will enjoy the up and down arrows in the viewfinder. These electronic indicators clearly show the required direction of rotation of the lens for sharp focus on the subject. (down arrows mean focus closer, up arrows mean focus farther away). When focus is achieved, the arrows and focus guide turn green. For run-and-gun productions where autofocus is desired, Canon’s accurate Dual Pixel CMOS AF is an alternative mode that ensures continuous and precise focus. The Used Canon EOS C700 FF Cinema Camera  is a camera for all seasons, with lots of reasons to embrace Full Frame while still being backwardly compatible with S35 and S16. It is a rugged and expandable highend camera system that promises to propel Full Frame even more rapidly into everyone’s vocabulary.